Did you know that MCAT Prep offers
an unrivaled 20 full-length MCAT practice tests,
10,000+ Q&As and much more? The Only Prep You Need.TM
Try us for FREE!

SIGN UP FOR A FREE PRACTICE TEST
FIND YOUR MCAT PREP

NO THANKS | SEND ME UPDATES 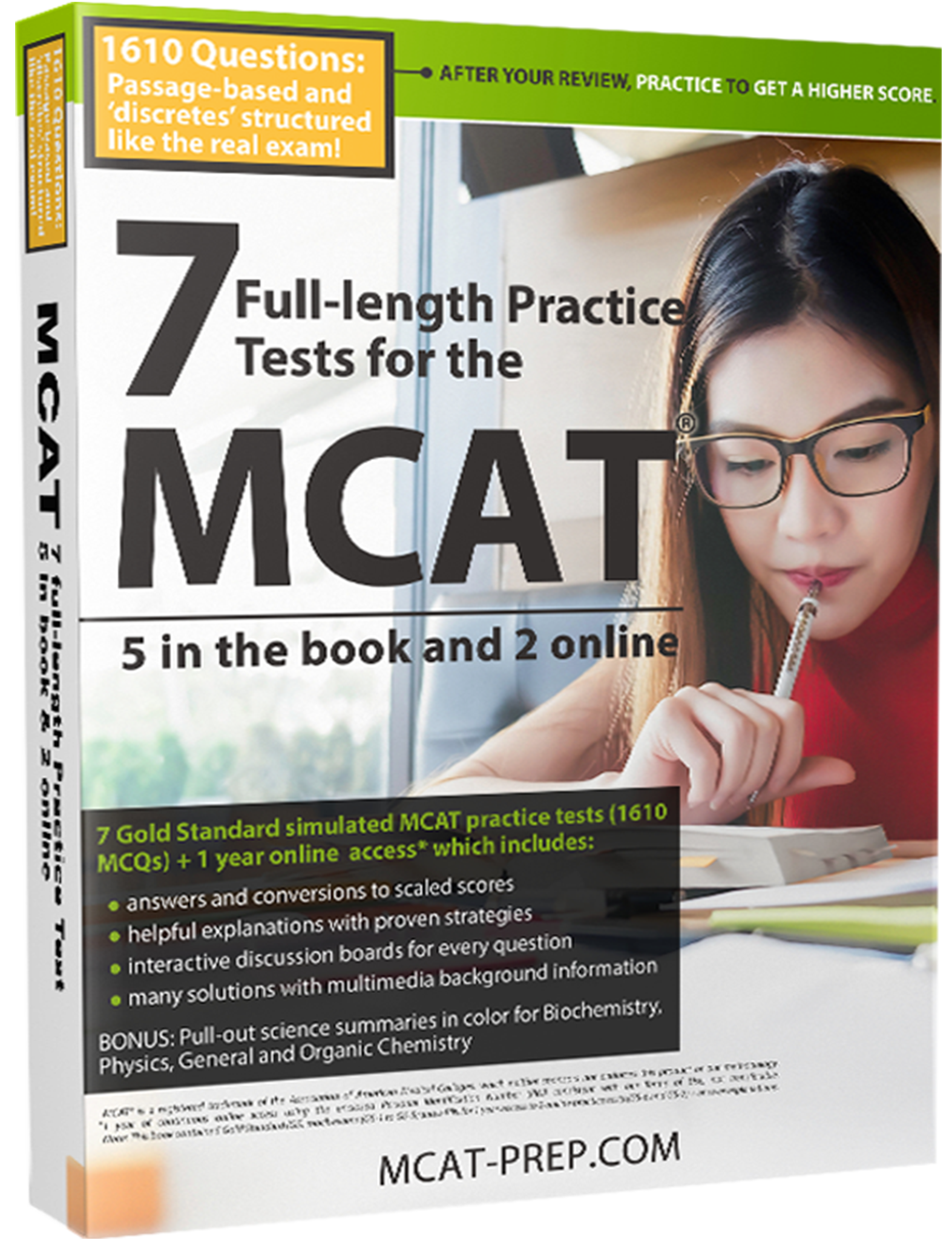 *There are exceptions. For example, in certain circumstances polypeptides are considered monomers and they may bond non-covalently to form dimers (i.e. higher orders of protein structure).

The current MCAT regularly has questions which require previous knowledge of the structures, features (including changes in charge with pH), 3- and 1-letter abbreviations of the 20 common protein-generating amino acids, etc. You can consider the following your MCAT Biochemistry cheat sheet (i.e. memory aid for quick reference, but obviously not to be used surreptitiously).

Note: Unless mentioned otherwise, the following images are excerpts from the Gold Standard MCAT Biochemistry ebook. 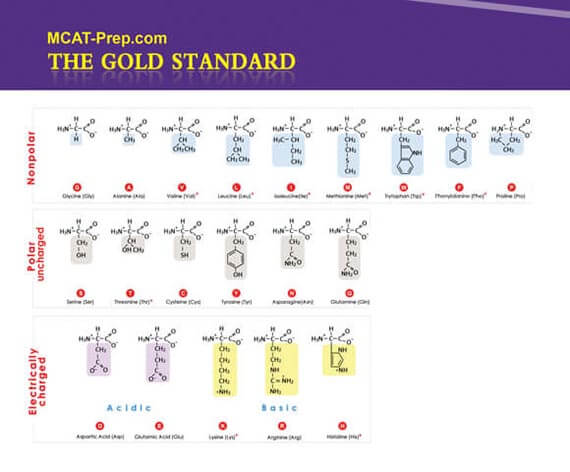 To be more precise, for the Polar Charged Amino Acids: 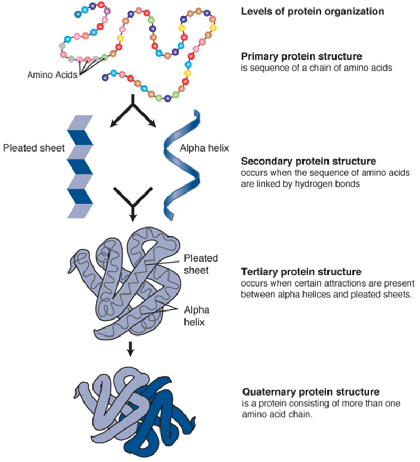 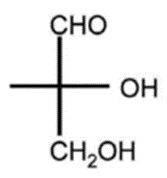 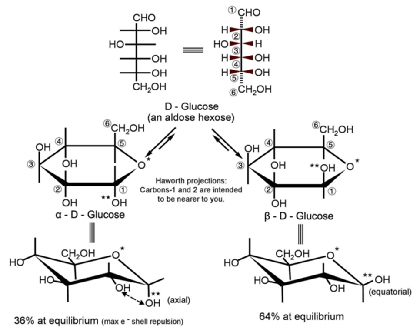 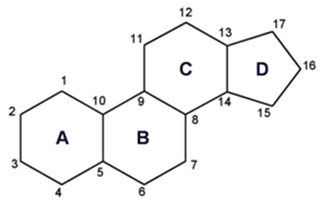 Note the direction of hydrogen bonding in the diagram below: 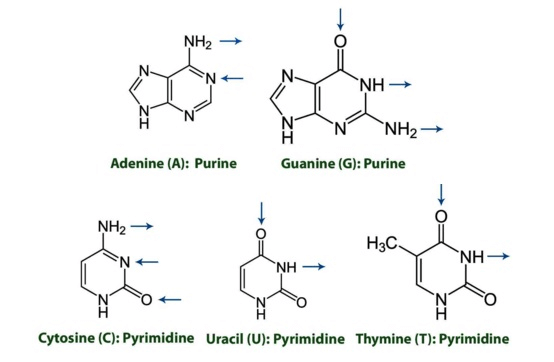 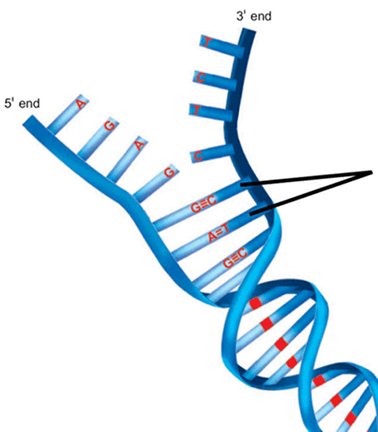 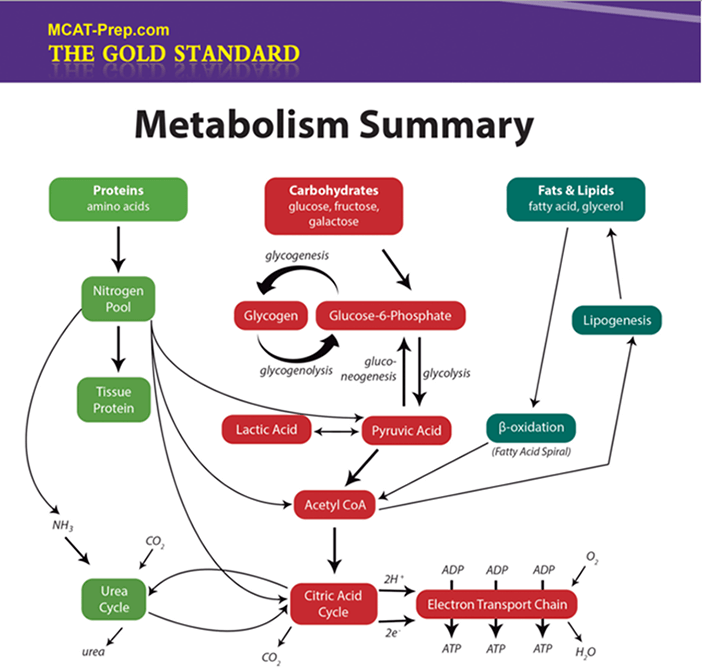 Note: Noncompetitive inhibition is sometimes considered a special case of mixed inhibition. Noncompetitive inhibitors have the same affinity for free enzyme (= E) and the enzyme-substrate complex (= ES) whereas mixed inhibitors tend to have a higher affinity for either free enzyme (= E) or the enzyme-substrate complex (= ES). 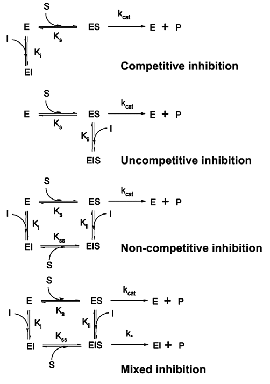 NOn-KoMpetitive INhibition = NO KM INcrease (but Vmax is decrease)

Mnemonic for Remembering the Effects of Enzyme Inhibitors 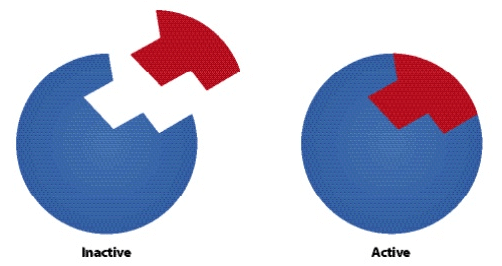 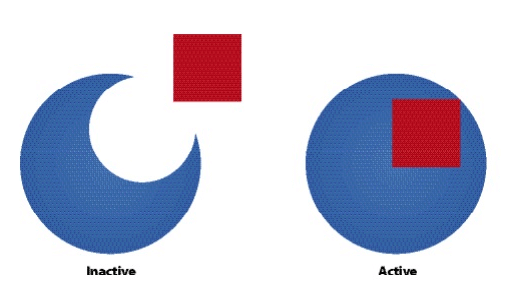 Note: Difference in polarity between (+) outside and (-) inside along with solute transport creates a membrane potential across the cell membrane. 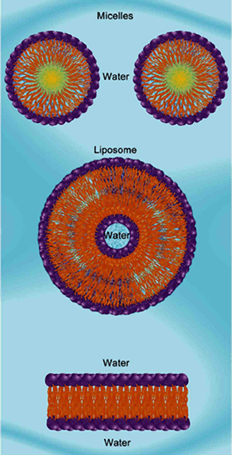 Amphipathic molecules arranged in micelles, a liposome and a bilipid layer [= plasma membrane] 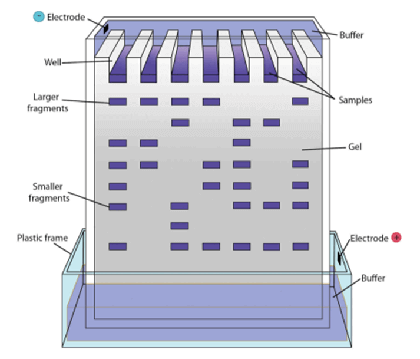 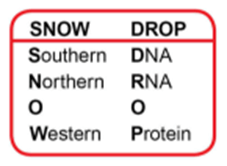 Mnemonic for Remembering the Blotting Techniques 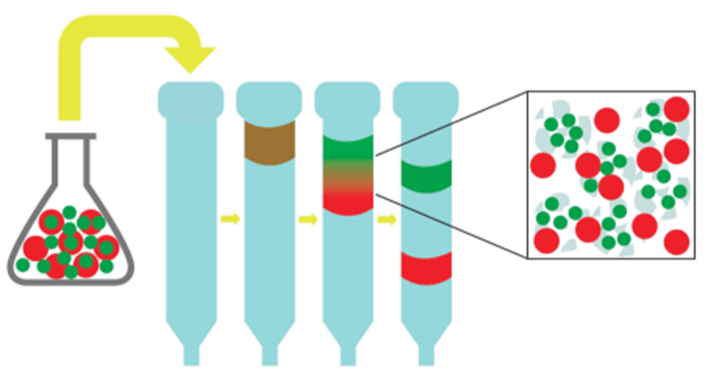 Do you have any comments you would like to share regarding our Gold Standard MCAT Biochemistry Review Summary?

In order to become active, a Map kinase has to undergo phosphorylation of its catalytic domain on amino acids 183 and 185 according to the primary structure. To create a catalytically inactive Map kinase - a kinase dead mutant - the most likely substitution within its active domain would be:

Protein phosphorylation is an important regulation of protein activity and function. Upon phosphorylation, a phosphate moiety is covalently attached to a hydroxyl (-OH) group of any of the three amino acids: Tyrosine (Y), Threonine (T) or Serine (S), which are the only 3 amino acids with a side chain containing hydroxyl. Keep in mind that all amino acids between the first and last in a polypeptide or protein, have both their carboxyl and amino ends involved in peptide bonding, so we must assess the side chain.

When a phosphate group is added, a conformational change often occurs within the protein domain. Such conformational change would allow the protein binding its partners and also phosphorylating them to promote a further propagation of protein activation along a signaling pathway. In the mutants suggested in answer choices A, B and D, a partial phosphorylation could still be taking place within the catalytic domain, which could have rendered a partially active Map kinase. However, in the mutant G183A185 (i.e. glycine - G - at position 183 in the primary structure and alanine - A - at position 185) suggested in answer choice C, no phosphorylation is possible within its catalytic domain due to the absence of the hydroxyl functional group, therefore this mutant would be ‘kinase dead’.

Going Deeper: Glycine and alanine are the most commonly used amino acids for substitutions when mutating protein active sites since these amino acids are neutral and relatively small as compared to others.

Background: The new MCAT requires knowledge of the side chains of amino acids, their features, as well as the 3-letter and 1-letter representations. The following image represents the 20 standard amino acids at physiological pH with the 9 essential amino acids identified with a red asterisk. 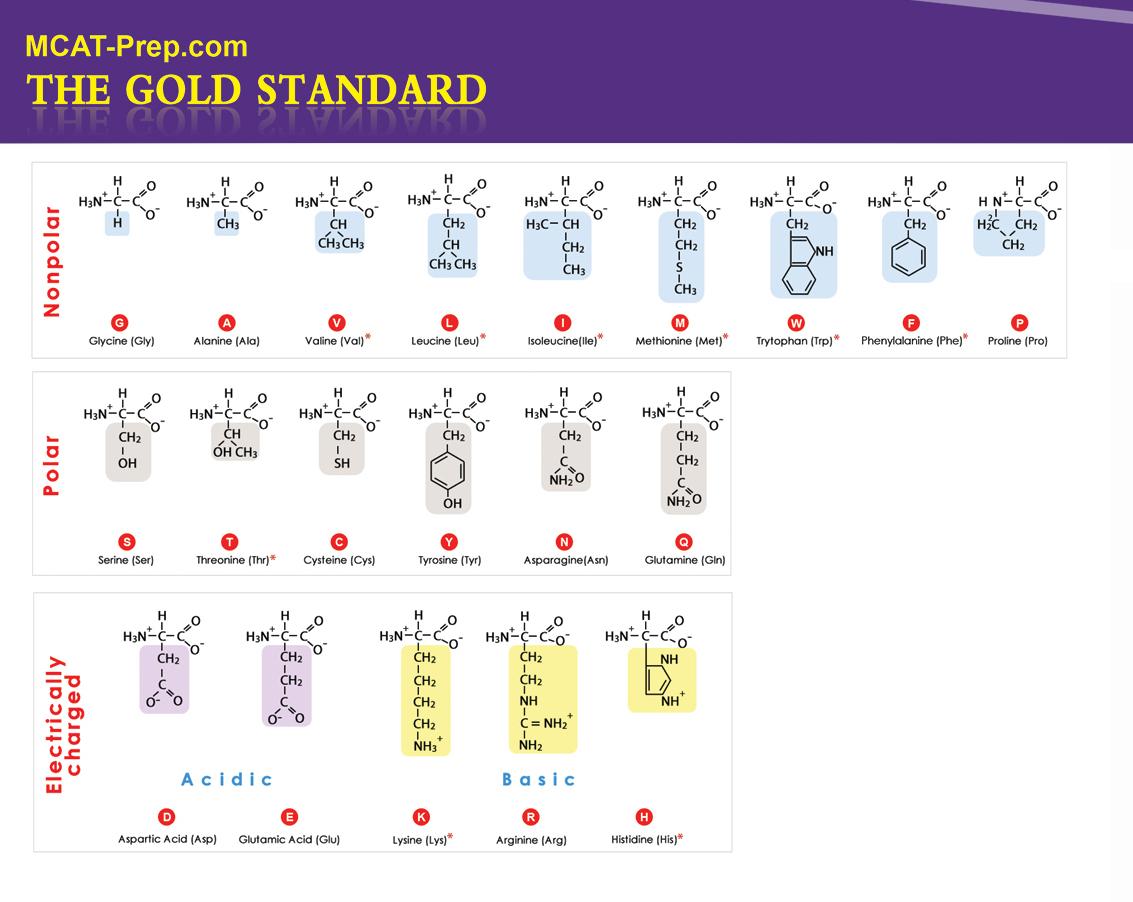 Apoptosis is the process of programmed cell death that can occur in multicellular organisms. The proteins involved in apoptosis are associated with pathways for cell cycle arrest and DNA repair. These processes are mostly regulated through the interplay of various proteins involved in feedback loops including some of the ones shown in Figure 1. 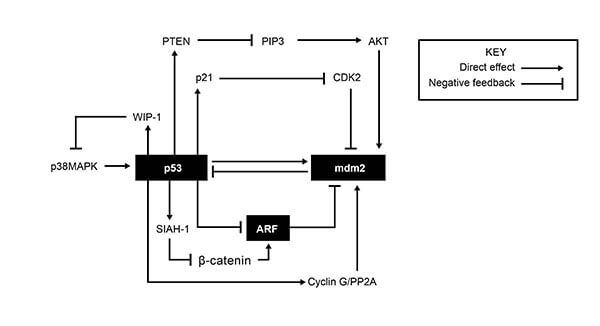 According to Figure 1, CDK2 activity would most reasonably increase due to all of the following EXCEPT:

Notice the key in the figure which will allow us to follow each arrow that stimulates the next protein and each symbol for negative feedback which means there will be some downregulation (amount/concentration goes down). [Notice a key step in the diagram: p21 inhibits CDK2]

Degradation of p21 implies that the concentration of p21 in its active form goes down. The diagram shows that p21 has a negative influence on CDK2. In other words, when p21 is high, CDK2 goes low. But in our instance, p21 is low (degraded) so this allows CDK2 to rise unchecked.

High cyclin G concentrations: From the bottom of Figure 1, we can see that high cyclin G leads to high mdm2 and low p53 (notice carefully, when we leave mdm2, there is only one place to go in the diagram because all the other symbols are pointing to mdm2 and only one symbol is pointing away). Note that we used the most direct route to get to CDK2 as the question used the words “most reasonably”. Low p53 means low p21 which we established will lead to a rise in CDK2.

A mutation in the gene that produces PTEN: The great majority of mutations will result in an ineffective gene product or none at all. Thus we have a decrease in PTEN which will lead to a rise in PIP3 (if you are unsure, think of what happens if PTEN goes up, then PIP3 must go down because of the negative feedback symbol), rise in AKT, rise in mdm2, decrease in p53 which we already established means an eventual rise in CDK2.

High p53 concentrations: clearly we get the opposite of the above, meaning a decrease in CDK2. High p53 stimulates p21 which has a negative feedback on CDK2.

Sign up for a FREE MCAT practice test now